Time flies, especially when you’re busy. And flies even faster when you’re teaching 4 classes. Since the last update to the lab’s website, so much awesome stuff has happened – and we have so much exciting stuff ahead! The quest for aquatic viruses (and other microorganisms) continues at full steam…

After returning from the Aquatic Virus Workshop (Plymouth UK) where Ian presented an update on efforts to understand this historical and biogeographic variability in SSaDV , there was an expectation that sea star wasting would take off again in early Fall. However, there were very few reports of SSWD at all in Fall 2016, and since that time we’ve done a bunch more work to figure out what may or may not be going on. Details of our work with echinoderms and sea star wasting disease can be found at this site, which is cross-posted at teamaquaticvirus.com.

In Fall 2016 the lab was joined by Ryan Besemer, a high school student from the New Visions program, which brings students into the lab for several hours each day to perform research. Ryan worked closely with Kalia on a project examining viruses associated with the intertidal kelp-consuming isopod Idotea spp. Isopods are not normally a significant constituent of marine food webs, but in coastal areas they are significant consumers of kelp detritus. In January 2015, we performed a sampling expedition to Santa Catalina Island, and further research expeditions in 2015 to Alaska and Washington, and in 2017 to Southeast Alaska retrieved even more isopods. Ryan’s project involved analyzing viral metagenomes prepared from the isopods, then completing a promising CRESS-DNA virus that represented a chimeric virus (i.e. sharing homology with both an RNA and DNA virus). He and Kalia then performed a wider survey of the populations in Alaska, California and Washington to determine is distribution. They also performed a study of tropism of the virus by dissecting out individual organs/tissues of several animals, and looked to see if they could detect the virus (belonging to the Cruciviridae) consistently in any tissues. The net result of this survey was that the detected virus was highly specific to one population in Washington (Port Townsend) and was present on the pleopods (swimming legs) of the animals. Further work by Kalia determined that the virus was most likely associated with epibionts (small cilliates and apicomplexans) living on the animal’s surface, rather than infecting the animal itself. The work is significant because up to now we have had little idea who or where the viruses infect, since they’ve mainly been recovered from environmental metagenomes. The work was recently published (after a record time of acceptance… 7 days?) in the journal Viruses. 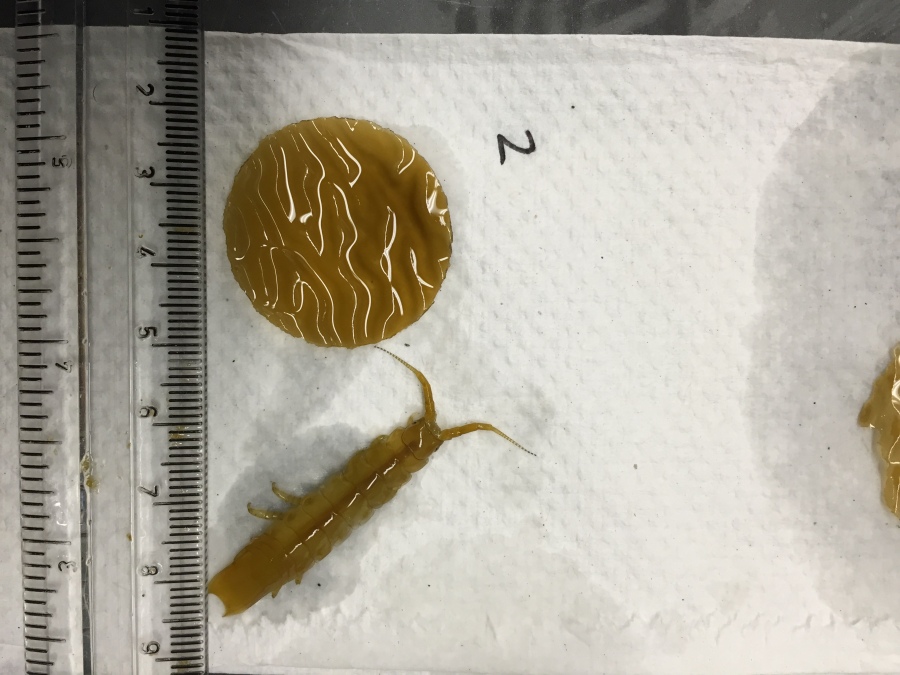 In Fall 2016, Kalia also continued work on the distribution of CRESS-DNA viruses in the freshwater amphipod Diporeia sp. A prior survey of CRESS-DNA viruses in Diporeia identified a virus, LM29173, which seemed to correspond in terms of load with the decline of Diporeia populations between lakes. Subsequent detailed work by Kalia confirmed that LM29173 was the dominant CRESS-DNA virus across many laurentian great lakes. However, its pattern of prevalence (i.e. % individuals affected) and load (copies per individual) was explained by genetic differences between lakes (published in Freshwater Biology), rather than by the decline in population. What’s more, viral load did not correspond with nutritional quality (lipid content or C:N ratio), suggesting that LM29173 probably doesn’t impart any ecological fitness cost to Diporeia. 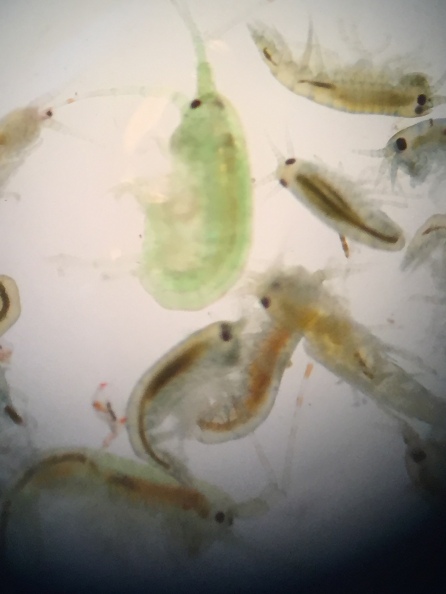 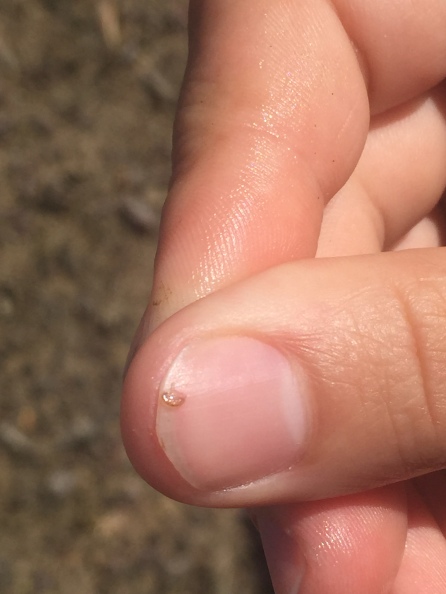 Gammarid amphipods similar to Diporeia (shown at right for scale)

Kalia also explored whether LM29173 presence/load was in any way related to gene expression of Diporeia. The rationale here was to pick up on finer-scale changes in amphipod biology than observable by bulk measurements, like lipid content, in response to potential viral infection. We found that LM29173 load was significant correlated with gene expression of:  1) replication, recombination, and repair, (2) cell structure/biogenesis, and (3) post-translational modification, protein turnover, and chaperones, which is somewhat consistent with known interactions of circoviruses in mammalian hosts. However, we found no relationship between viral load and immune-related genes. This work was recently published in PeerJ. 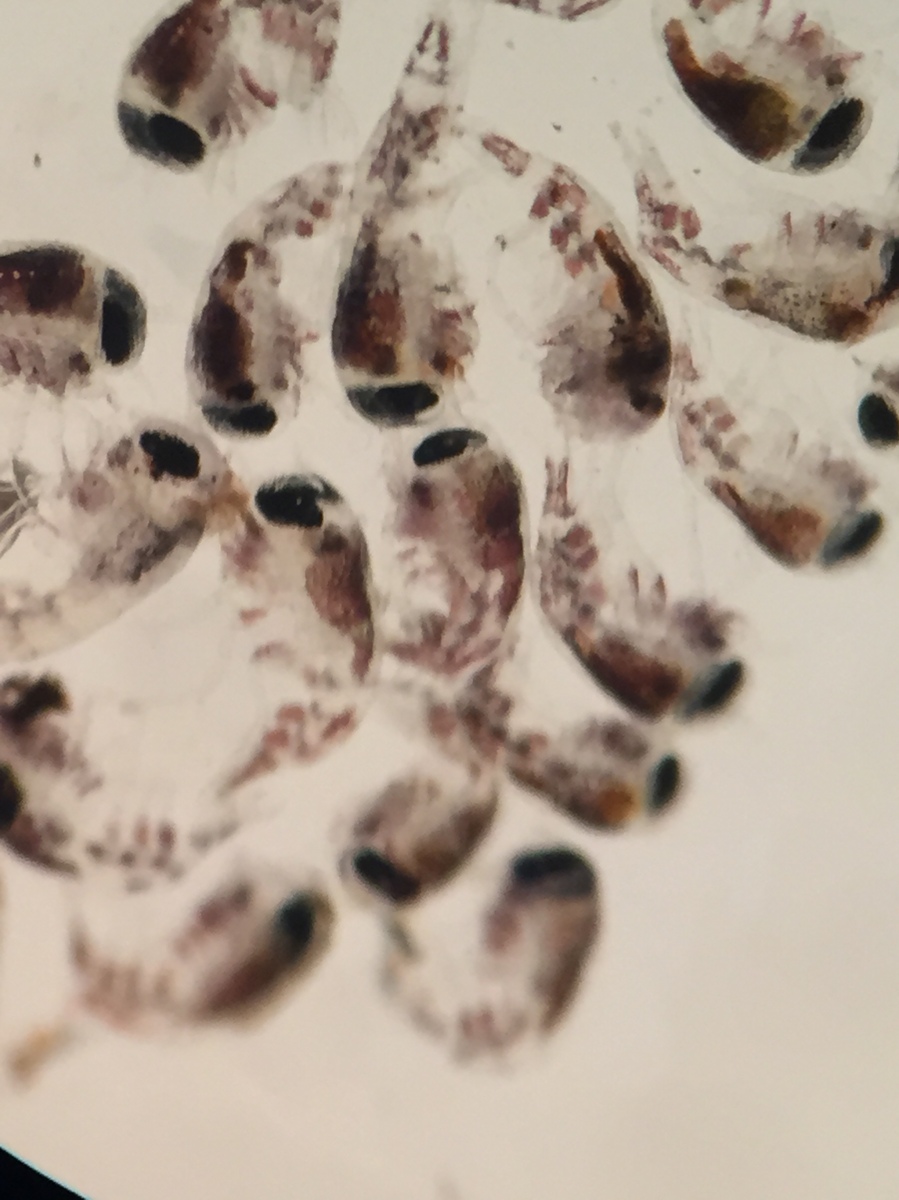 In Spring 2017, Ian began teaching 2 new classes (in addition to his usual class BioMI3500/EAS3555 Biological Oceanography and graduate module BioMI6906 Viral Diversity and Ecology). The first was co-taught with the late Eugene Madsen, called BioMI2790 Environmental Microbiology, attracted 6 students eager to learn about microbial diversity as it relates to environmental conditions in terrestrial and aquatic habitats. This class wasn’t too much of a deviation from Ian has taught before. However, his second class, BioMI1100 Dormitory Microbiology, which attracted 96 non-major students, was completely new. Cornell makes all undergraduate majors in the College of Agriculture and Science take at least 1 life science class – and this class was designed to provide practical information on microbiology for students on STIs, human microbiology, food safety and even alcohol production. Teaching a class to 96 students de novo is quite the effort – it took about a year to come up with the material, and working out the kinks during the semester was a challenge. However, in the end it was a thoroughly enjoyable experience, and hopefully the students learned a lot!

In Summer 2017, research focused on sea stars and amphipods, however the approach has changed. We’ve reached the limits of what association between viral genomes and epidemiology can tell us – and now our work focuses upon actually seeing viruses in tissues. Since last spring, both Elliot and Kalia have been working on in situ hybridization-based approaches to look for the presence of viral DNA and RNA in thin sections of animals to ‘localize’ the virus within animals. This involves a great deal of intricate work and method development, but the net result will (hopefully!) be a better understanding of exactly where and how these viruses may affect their hosts. It’s a departure into the world of ‘pathology’ – something that we haven’t tackled much of in the past. The results are promising – but take time – stay tuned! 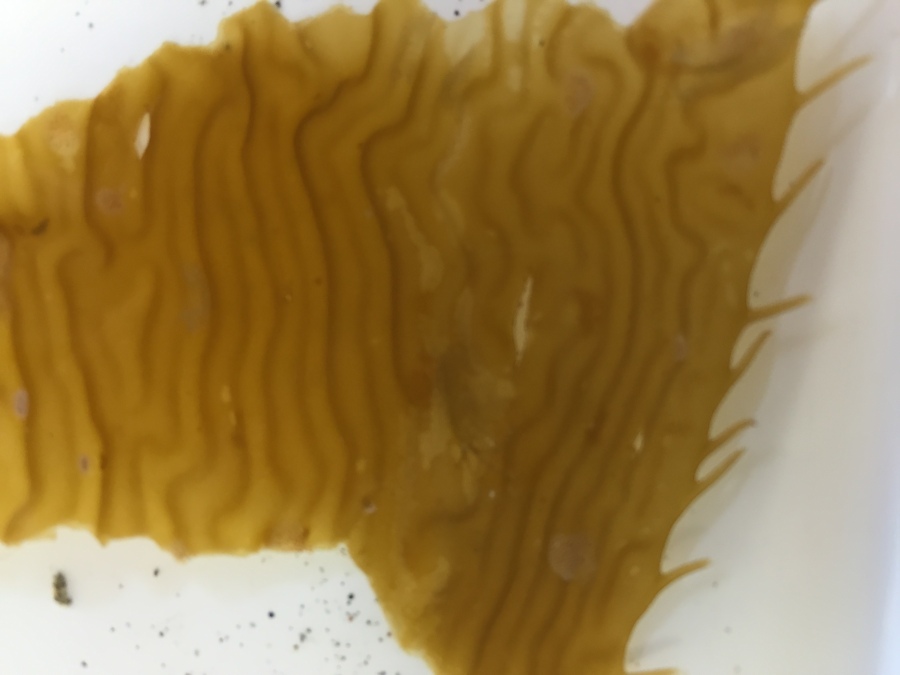 Can you see the amphipod (Peramphithoe sp.?)? Working out the pathology of viruses that infect Peramphithoe (and others) will help determine their impact on aquatic ecosystem function.

This summer also saw the first major cyanobacterial bloom in Cayuga Lake in over 35 years, which occurred after a stretch of 5 days of sunny, hot and calm weather that was preceded by 2 weeks of rain. The bloom was visually impressive and generated a lot of concern amongst local recreational water users. Ian performed a day-long survey of the lake, stopping at 8 locations to delineate the bloom and take samples for cyanobacterial identification. Not exactly viruses, but still pretty cool! 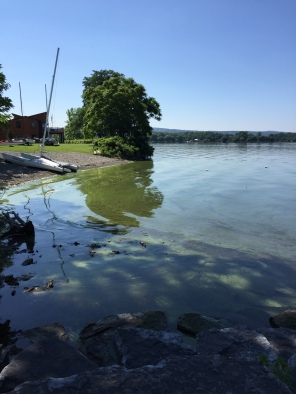 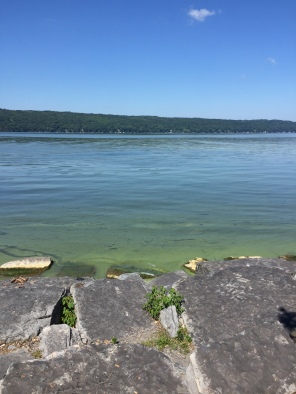 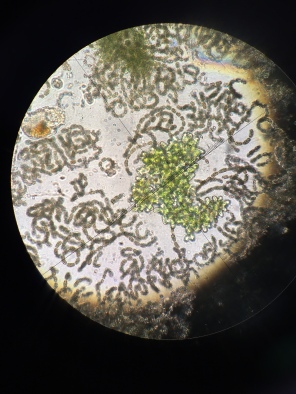 In September 2017, Ian and Kalia presented at the 15th Symposium for Aquatic Microbial Ecology in Zagreb, Croatia – a symposium Ian first attened in 2007. It was a fantastic opportunity to learn the state of the field for non-metazoan associated viruses and other microorganisms. We also got a chance to check out croatian echinoderms! 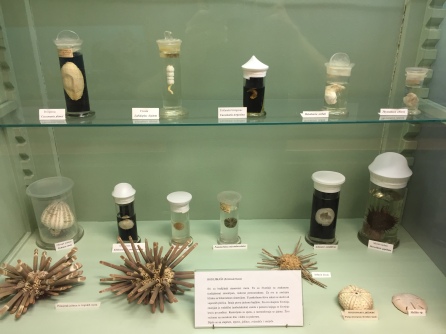 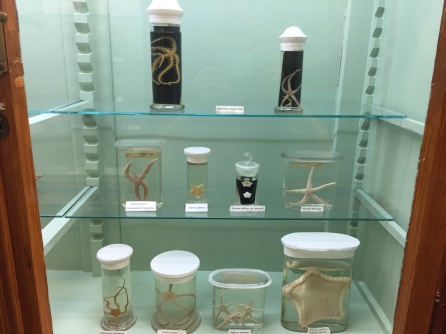 The echinoderm collection at the Croatian Museum of Natural History

So the lab continues to make significant progress and stay busy. What does the future hold? Ian is off on sabbatical to New Zealand from January through April 2018, and will survey both sea stars and amphipods during that time. Ian has a collaboration with Carrie Solomon (Gallaudet) looking at RNA viruses in the Anacostia River, which is in the final stages of analysis. We also have manuscripts in review about our work on seasonal dynamics of finger lakes RNA viruses, and an update on work on sea star virology. In December 2017, the lab was awarded another NSF grant to work with collaborators on the US West Coast working on population genetics of sea stars and their susceptibility to viruses. And there’s more to come.

Oh, and Ian is still playing hockey 3 – 4 nights a week. Hopefully his future record of securing grants is better than his record in hockey (4-8-2; average goals allowed = 4.2). 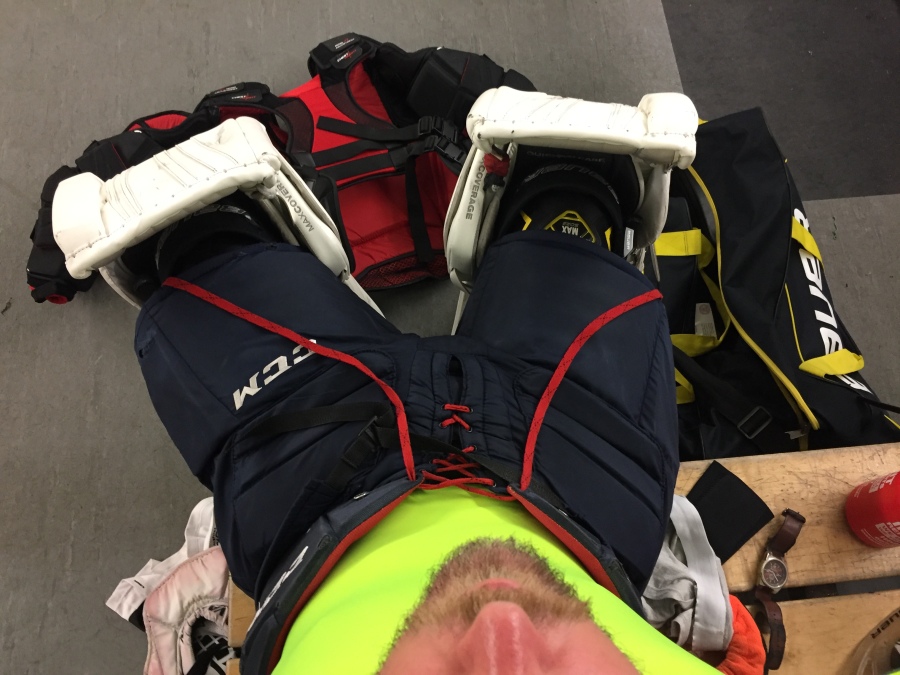