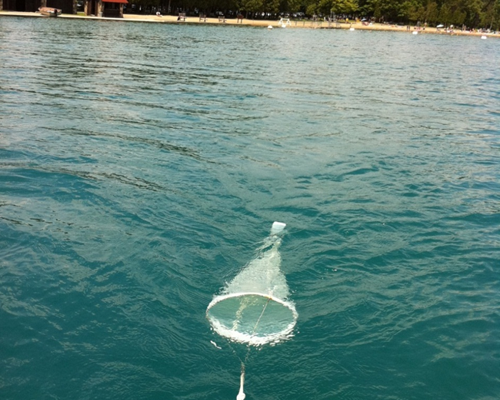 Viruses are a naturally abundant component of plankton in lakes and rivers of upstate New York (Middelboe et al. 2008) (Fig. 1). They mostly infect and kill abundant, co-occurring bacterial and small eukaryotic hosts, and thereby they play an important role in shuttling organic molecules between cell-bound and dissolved organic matter pools that are readily consumed by uninfected microorganisms (Weinbauer 2004). While most viruses in typical freshwater environments originate from autochthonous sources (i.e. hosts within the freshwater environment) (Peduzzi & Luef 2008), freshwater virioplankton may also originate from allochthonous sources (i.e. those outside the freshwater environment) including those from terrestrial hosts (Olapade et al. 2006).  In New York state, the catchments of most lakes are influenced by agricultural land uses, including both livestock and crop production (Mills et al. 1978). There is currently very little information on the types or persistence of viruses of agricultural origin that enter lakes via passive mechanisms (e.g. runoff).  The goal of this study is to screen viral consortia from two contrasting freshwater ecosystems and adjacent agricultural soils, to detect the presence and decay rates of allochthonous viruses of agricultural origin in lake habitats.

We screened viral communities in two lakes, Fayetteville Green and Cayuga, and a pooled agricultural soil sample from nearby both locations using metaviriomics (shotgun sequencing of viral nucleic acids) targeting both DNA and RNA-based viruses (i.e. 16 metaviriomes total) . Metaviriomics is the only mechanism by which viral diversity can be compared between agricultural and freshwater habitats, since viruses lack conserved genetic elements that would otherwise enable PCR-based approaches (Breitbart et al. 2003). The metaviriomic sequences were compared between the aquatic and agricultural samples to identify allochthonous viruses present in the lakes. Candidate allochthonous viruses and several autochthonous viruses were targeted using quantitative molecular approaches (qPCR) to assess dynamics over the summer, and to estimate decay rates of these viruses under ambient conditions.

On the bases of these results, we designed quantitative PCR primers and probes representing both autochthonous (cyanomyovirus, phycodnavirus, podivirus) and allochthonous (geminivirus, microvirus, circovirus) primer/probe sets for quantitative analysis of viral genotypes seasonally and in decay rate experiments. These results have shown variable results, with clear pulses of terrestrial viruses in aquatic habitats (Fig. 3), and genotype-specific decay rates that were slower than reported in marine habitats (Fig. 4).

Mary Beth Wilhelm, Undergraduate Investigator, Fall 2009 – Spring 2011
The Fayetteville Green Lake is a small (0.258 km2) meromictic marl lake that is host to a thrombolitic bioherm inhabited by coccoid and filamentous cyanobacteria. To date there has been only limited study of bioherm cyanobacterial community ecology, and none focusing on their molecular diversity. Samples of the bioherm were collected along vertical and spatial transects on a portion of the thrombolite in early fall 2010. Cyanobacterial assemblage spatial variability and operational taxonomic unit composition was analyzed by automated rRNA intergenic spacer analysis (ARISA). A total of 123 cyanobacterial ARISA operational taxonomic units were observed across all fingerprints. Cyanobacterial assemblages were variable across depth and spatial gradients, and may be structured by gradients in light availability and habitat stability. Cyanobacterial community fingerprints were more taxonomic unit rich, diverse, and had greater fingerprint similarity in deeper samples than those at the surface. Several operational taxonomic units were common to all samples taken, while the majority of assemblage components were heterogeneous between transects and depths. Hence, our results suggest that cyanobacterial communities on the thrombolite in Green Lake represent a mixture of taxa that are selected for by prevailing physicochemical conditions, while other taxa are selected for on spatial scales of meters and may represent more specialized cyanobacteria on the thrombolite.  Moreover, our data suggest that the depth-dependent structure of bioherm cyanobacterial assemblages may be a consequence of habitat conditions, which may include light intensity and quality, temperature variation and habitat stability.

Work published from this project: